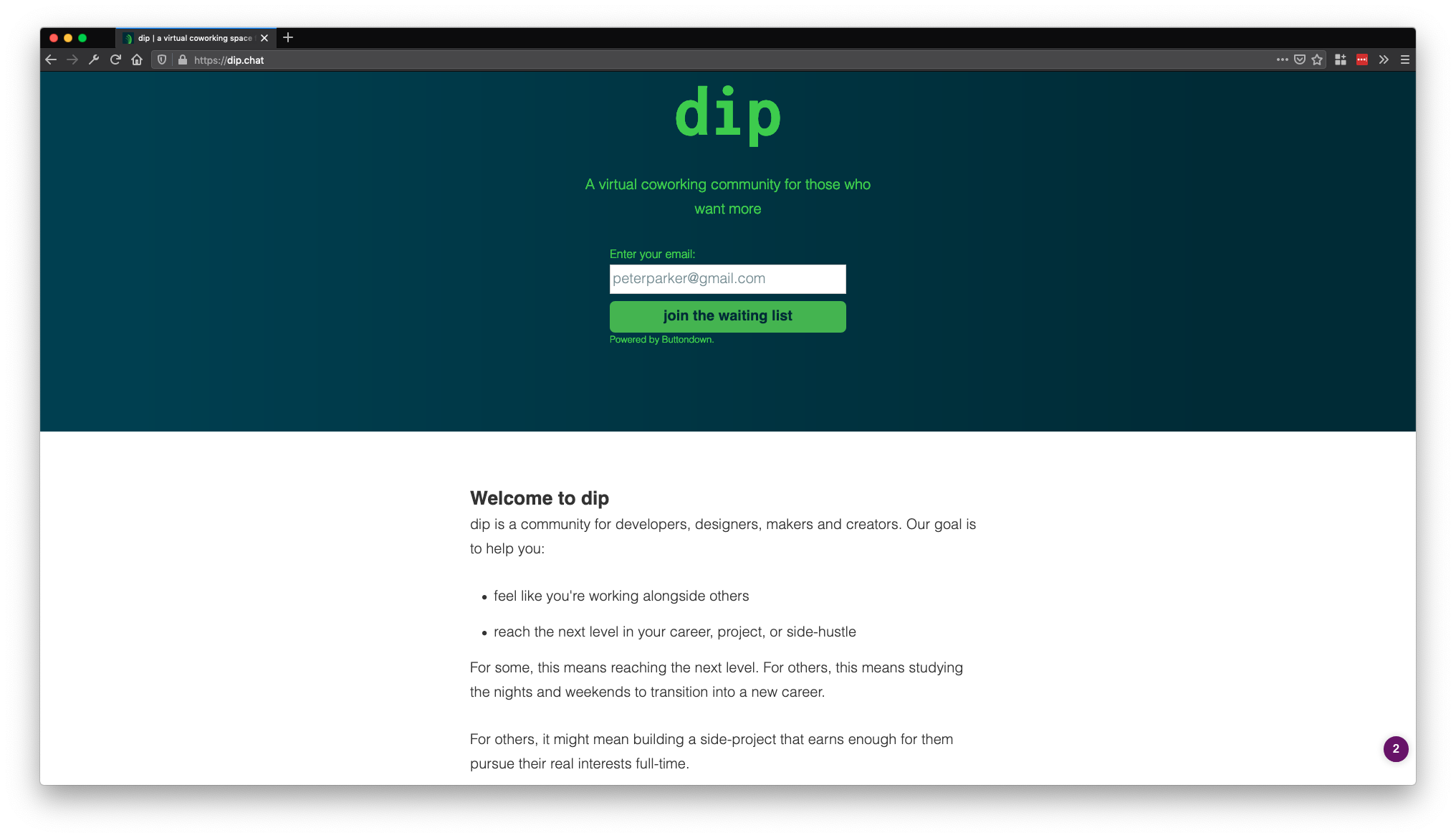 On January 16th, 2020, I will shut down the dip-chat workspace on Slack. I will also delete all the emails from the dip-chat Buttondown and close the account. I will leave the site up at dip.chat but I will remove the sign up link.

The idea for a “virtual coworking” space came earlier in 2019. I was busy working on a side project during the nights and weekends. I would either work from home or go to a coffee shop and work. The thing I wanted though was to surround myself with others doing the same thing—working on side projects outside of their 9-5 job.

The coffee shop provided the atmosphere I was looking for, but it didn’t provide a community of “weekend warriors.” At least ones that I could connect with.

Similarly around that time, I rekindled an old friendship with a friend working on Tandem. After he told me about Tandem, I decided to try it out with my team at Echobind. Instantly, I was hooked. I thought,

This app could be used to power a virtual coworking space!

Hence, I bought the domain dip.chat (heavily influenced by wip.chat).

I designed a landing page and launched it in August 2019.

How I thought the project would go

Naively, I thought the following would happen:

How it actually went

People joined. The intro-bot I set up working about 75% of the time. The other 25% people would post in #general asking questions that would have been answered had they read the intro.

For the first two weeks, things were fine. We even had one or two virtual coworking sessions. One of these was a combination with AuxParty.

There were maybe 5 of us, from all different parts of the world, in an AuxParty room. We took turns playing songs that were good background music for working. It was awesome!

The other session was between me and a few other people in a “Meet & Greet” room on Tandem. A few people joined and we chatted about our background, our projects, etc.

The Slack wasn’t super active. If I posted a question or someone else did, people responded and we had discussion. But not much happened organically.

Then as time went on, I got busier and put less time into it. People started participating less and it become more quiet.

I stopped using Tandem as much.

And now we’re at the point where no one has posted maybe for a few weeks or month now? I hardly check it myself.

I think the reason it failed is due to a combo of things.

Too high of expectations

I wanted this to fill lots of personal needs:

I expected it to be self-sustaining from the start. But I realize now I don’t think that can happen unless you put the work in from the beginning.

I was the person a year ago who had 7-10 different ones. It burnt me out though. I couldn’t keep up. I mean it’s the similar to being in college and trying to be part of 10 different clubs. You just can’t do it.

Target audience was too broad

I think that confused a lot of people. If you look through the intros in our Slack, there are people from all walks of life.

Even though I consider it a failure, I met a lot of awesome people and for that, I am thankful.

And for everyone who joined and participated and supported the project, thank you! It means a lot to me personally. It’s unfortunate things didn’t work out but that’s the beauty of experimenting! You try something. See if it works. And regardless of the outcome, you take what you learned and apply it to future projects.

Stats can be fun sometimes. Here are the ones I have related to dip:

If you still want something that is similar in concept to dip, here are similar communities and groups you might want to check out:

Disclaimer: please read the code of conduct and see if these groups align with what you are looking for. I have not joined or participated in any of these groups. This list is from my own research. Therefore, please check them out before joining.

I want to give special thanks to the following people who were beyond helpful throughout this project:

When I first shared the idea, Miguel reached out asking to get involved. He even offered to build an app for the idea together. Although we didn’t do that, he was my go-to when:

Really appreciate him as a person. If you’re not following him on Twitter, you should start. He’s young, ambitious, very intelligent and has a lot of bright ideas. He’s someone who’s name you’re going to know in the near future if you don’t already.

After reflecting on the situation of dip and deciding whether or not to sunset the idea, Prince was my sounding board and my #1 support. He’s someone who I started getting to know in 2019 and whom I now consider a close friend.

If you need more positive, uplifting energy in your life, Prince is your person! In additional, you’re probably learn a lot from him. He’s also very intelligent and is a brilliant teacher.